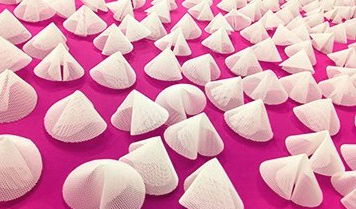 As part of the opening event for the Trinity College Trees Exhibition there will be a guided walk to all the exhibits by one of the project team.   The walk will take place on Friday 29th September between 5.15-5.45.  There will be a limited number of spaces.  Details on how to sign up for the guided walk will be posted nearer the time.

If you are unable to book a slot on the guided walk don’t worry the team are also in the process of developing a sound piece that will accompany those wishing to take a self guided walk from Saturday the 30th of September until the end of the exhibition.  Once the walker brings their own headphones they can visit the works at their leisure.   In front of each of the chosen trees the team also plan to have an A4 stand with a brief description of the project and the positioning of each tree on a campus map.

Included in the audio piece is a brief introduction to the Trinity Trees Project, the trees involved and the artworks commissioned in response to these trees.

During recent musings on the hairy structure of the sage plant I was reminded of some early experiments I completed with transparent piped silicone.

This led me to doing another few spiky experiments (see images above).

I also decided to add some spiky silicone ‘hairs’ to an unrelated experimental piece that I have been working on.  (See the images below). 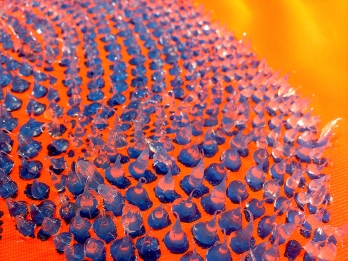 There were some interesting results from these tests so this is something that I will definitely look into further in the development of this piece.

The other thought that came to me while thinking of the work to be placed in or near the medicinal garden is that I would like to incorporate a more tactile element into this work. I hope that the piece itself or a sample of it will be accessible to the public to touch.

More artistic musing on the sage plant to follow.

Sometimes a book comes along that is just a bit different to the everyday coffee table book on gardens and plants and The Gardener’s Companion to Medicinal Plants is such a book. It is strange but there is something in the book not having a glossy slip cover that makes it feel more grown up, […]

via Book Review: The Gardeners Companion to Medicinal Plants — The Patient Gardener

Over the past three days I have published blogs relating to the Physic Garden in Trinity College Dublin. Where our initial sampling has revolved around the research and imaging of the sage plant we have as yet to finalise which plant we would like to be part of the project.

Jane Stout from the TCD Botany Department suggested that I talk to Fabio Boylan about his research pertaining to medicinal plants. Fabio works in the Pharmacognosy area of Trinity College. I contacted Fabio and we hope to meet over the next week or so. I will share some of the highlights from our conversation in a future blog.

Jane also introduced me and the project to Fraiser Mitchell who then introduced me to Hazel Proctor who designed the garden and wrote the booklet about the garden.  Hopefully I will also get a chance to meet and talk about some of her experiences and knowledge of the garden over the coming weeks. Update to follow.

Prior to these meetings I have spent some time looking into the basic properties of and imagery related to some of the easily recognisible herbal plants found in the Physic garden. 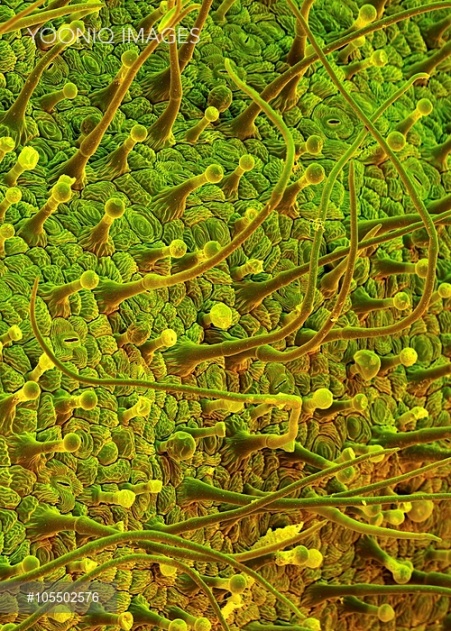 ^BLavender leaf.^b Coloured scanning electron micro- graph (SEM) of a section through the leaf of a lavender plant (^ILavandula^i ^Iangustifolia^i). Numerous dense branched hairs (trichomes) cover the leaf’s surface. These have both a protective function against pests and serve to reduce evaporation from the leaf. The rounded structure (pale brown, lower centre) is an oil gland, which produces the plant’s aromatic oil. Below this is the sectioned leaf, with the impermeable cuticle uppermost, supported by epidermal cells. Lavender is a herb which grows wild in the Mediterranean region, but is farmed all over the world. Magnification: x380 at 6x7cm size. x590 at 4×5″ 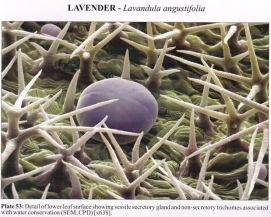 B0006134 Stinging hairs on a nettle leaf Credit: Liz Hirst. Wellcome Images images@wellcome.ac.uk http://images.wellcome.ac.uk The surface of a stinging nettle leaf. The large stinging hairs are hollow tubes with walls of silica making them into tiny glass needles. The bulb at the base of each hair contains the stinging liquid that includes formic acid, histamine, acetylcholine and 5- hydroxytryptamine (serotonin). The tips of the glassy hairs are very easily broken when brushed, leaving a sharp point, which easily pierces the skin to deliver the sting. Scanning electron micrograph 1993 Published: – Copyrighted work available under Creative Commons by-nc-nd 2.0 UK, see http://images.wellcome.ac.uk/indexplus/page/Prices.html 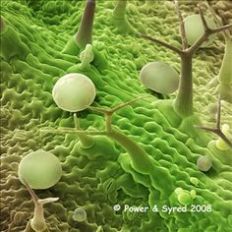 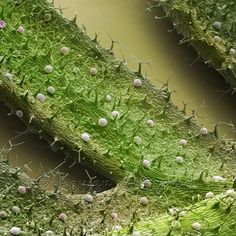 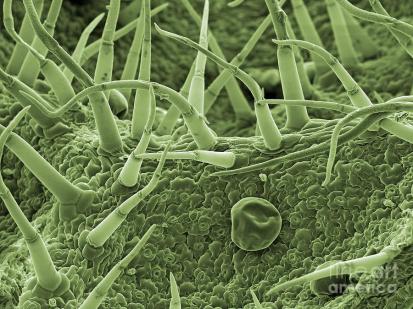 In particular I was taken by the secretary glands that appear in the images of the lavender and peppermint plants. See the mosaic of images above, which are a selection of microscopic images from nettle, lavender and peppermint samples. Of course the spiky hairs/fronds that project from the leaves and stems are also amazing to look at. I look forward to learning more about the physical properties and working of these plants. I am also conscious that I haven’t even started to look into the specifics of their healing properties…..back to work for me!

We took a leaf sample from the sage plant and here are some of the images Clodagh took on the Scanning Electon Microscope. 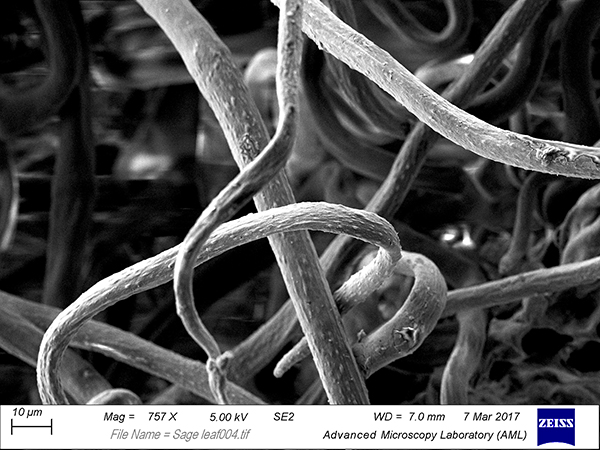 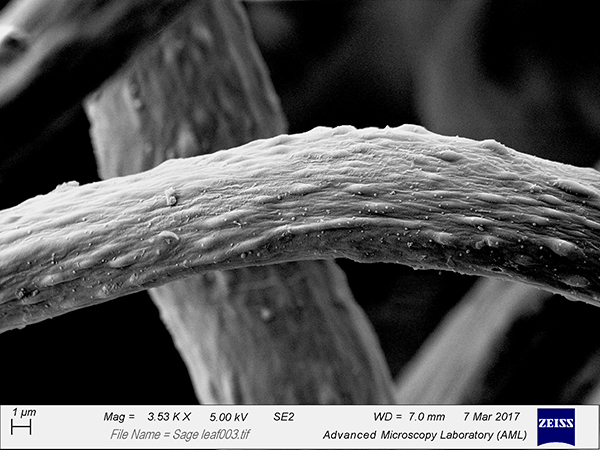 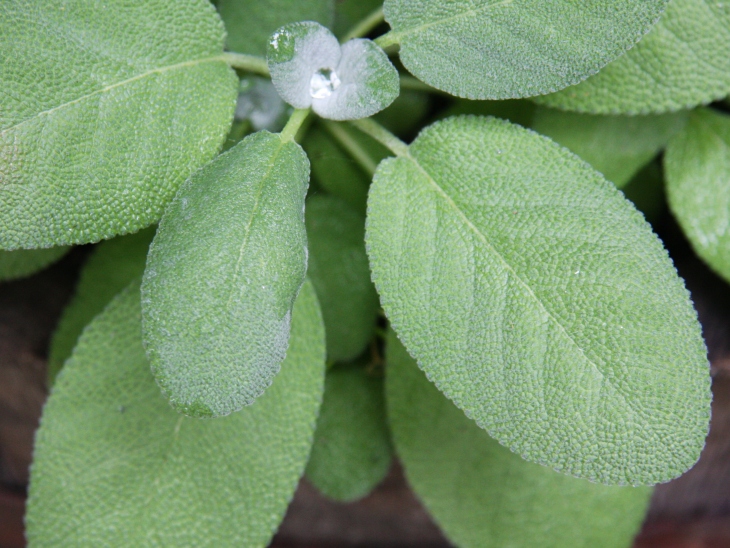 Salvia officinalis (sage, also called garden sage, common sage, or culinary sage) is a perennial, evergreen subshrub, with woody stems, grayish leaves, and blue to purplish flowers. It is a member of the mint family Lamiaceae. It has a long history of medicinal and culinary use.

Illustration of Salvia officinalis by Kohle from the book entitled Medicinal Plants.

Sage has been used since ancient times for warding off evil, snakebites, increasing women’s fertility, and more. The plant had a high reputation throughout the Middle Ages, with many sayings referring to its healing properties and value. It was sometimes called S. Salvatrix (sage the savior), and was one of the ingredients of Four Thieves Vinegar, a blend of herbs which was supposed to ward off the plague. John Gerard author of Herball (1597) states that sage “is singularly good for the head and brain, it quickeneth the senses and memory, strengtheneth the sinews, restoreth health to those that have the palsy, and taketh away shakey trembling of the members.” In past centuries it was also used for hair care, insect bites and wasp stings, nervous conditions, mental conditions, oral preparations for inflammation of the mouth, tongue and throat, and also to reduce fevers.

In modern days there has been some studies carried out on humans involving sage. It should be noted that these studies are not widely recognised and more research would need to be done to further their claims. The study involving healthy humans demonstrated improved memory, attention/executive function, alertness and mood following single doses of cholinesterase-inhibiting sage extracts or essential oils. Smaller studies on Alzheimer’s patients demonstrated improved cognitive functioning and behavioral function (Clinical Dementia Rating) following a 16-week administration of a Salvia officinalis alcoholic tincture.  I don’t claim to know much about this subject and would again caution that it looks like more research needs to be done in these areas.

Illustration of Salvia officinalis by Kohle from the book entitled Medicinal Plants.

Over the next four days I will add one post per day about our ongoing interest in the Physic garden in Trinity College Dublin.

For this first post I would like to give a brief background to the garden itself. Tomorrow I will highlight the sage plant. The following post will illustrate some of the SEM images we have already taken of the sage plant. Finally I will round up by talking about our dilemma in choosing which plant to focus are research on.

So to start off with Trinity College initiated a physic garden on the main college campus in 1687 to provide plant material to support the teaching of medicine. By 1173 this garden had become derelict, and was partly used to dump offal from the Anatomy Department.

In 2011 to mark 300 years of Botany, Chemistry and Medicine at Trinity College, Dr Henery Oakeley, Garden Fellow at the Royal College of Physicians of London opened the new Physic (medicinal) garden on the main campus of Trinity College. The garden features sixty plants of medicinal interest and aims to highlight where some medicines come from.

Although some plants are still used in herbal medicines, modern drug development relies more on finding novel chemical of medicinal value in plants and then reproducing this chemical through biosynthesis techniques on an industrial scale to produce the relevant drug. Botany is no longer taught to medical students however the links to drug discovery and development are still as strong as ever. The Physic garden showcases medicinal plants of ancient and contemporary medicinal relevance and regonises the linkage between the disciplines of Botany, Chemistry and Medicine. It is situated between the Hamilton and Llyod Building at the East end of the campus. (excerpt taken from – Trinity News and Events – 21st April 2011)